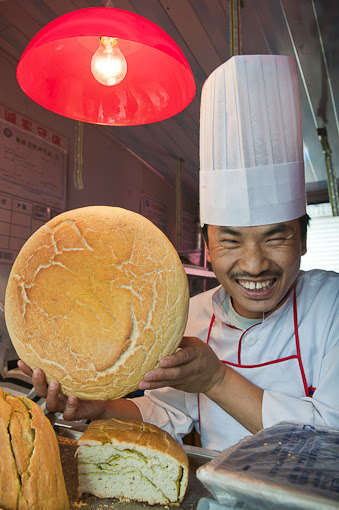 I was busying myself photographing the usual suspects, pigs feet, live fish, delicious looking fresh vegetables stacked chin high in the stalls when the young baker beckoned me over to show off his beautifully baked round bread just out of the oven. We didn’t need to speak each other’s language to see the pride in his eyes. He wanted me to take his photograph, which I did, sharing the results with him on the camera’s screen.

I was walking through the Mo Jiajie Market in the center of busy Xining, the capital of Qinghai Province, nestled up against Tibet and Sichuan and Gansu. I hope to blog a photo or two and several paragraphs every day I have internet access. 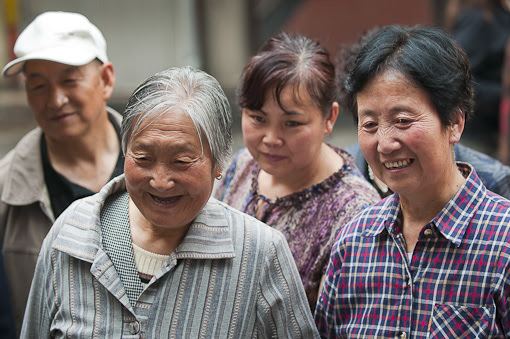 Further down the street I saw a large crowd gathered outside a music store, the laughter rolling out and into the market.  It was coming from the shoppers and the television set outside on the steps playing a comedy show. Everyone was transfixed with smiles on their faces.

I quietly slid through the crowd and up and into the store to shoot out of sight as if in a duck blind. No need really, the crowd didn’t notice me until much later and then the two ladies pictured wanted to see their photos. They seemed pleased, they giggled and pinched my cheek before walking down the street. I wonder if they bought the pigs feet.

To view more photographs from China, visit my portfolio site.
Posted by Tom Salyer at 3:06 AM