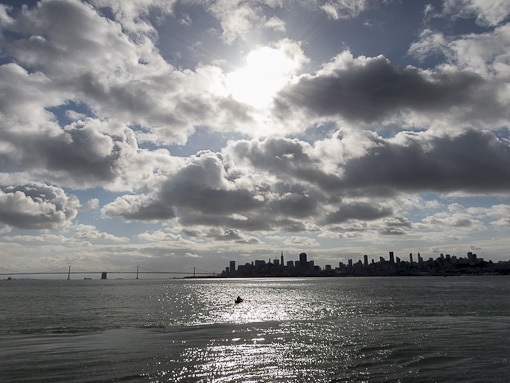 After rowing around Alcatraz Island for sport, two athletes return to the freedom of downtown San Francisco.

The long concrete cell blocks rose three stories high above the prison floor, their steel doors permanently open and silent. Even though hundreds of visitors passed where nearly 1,500 of the country's most dangerous prisoners spent years of their lives, including Al Capone and Robert "The Birdman" Stroud, only a quiet murmur floated about the concrete and steel.

Listen to the sound of footsteps recorded in The Hole contrast with birds, waves and far off bell, sounds of freedom wafting into Alcatraz. iPhone & iPad friendly version.


Last November I was visiting Alcatraz Island, one of the Golden Gate National Parks, a rocky outcrop in San Francisco and a scant 1.5 miles from the downtown skyline.

Inside the notorious D-block, also known as The Hole, where the worst of the worst were housed for bad behavior, I entered an eight by eight foot all steel cell. My steps thumped from the floor, off the  walls and bounced from the ceiling. I paced back and forth between the to close walls. Was this what a prisoner heard while isolated in near darkness? 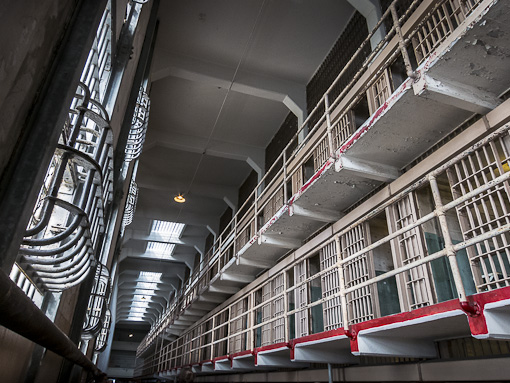 Now a National Park, the federal prison on Alcatraz Island housed the USAs toughest convicts, from 1934 through 1963.

Outside the cell house and along a cliff side trail, my attention was drawn to the sound of waves lapping the shoreline, and the sound of birds nesting along the rocky cliffs. The low drone of an unseen airplane passed overhead. I wondered if these sounds of the outside world ever reached the confined convicts ... maybe on a very still day.


As I explored the walled recreation yard where prisoners could see the blue sky and breathe fresh air, work out or play a game of baseball, I could not see San Francisco Bay, but I could hear it as a navigational buoy bell clanged every few seconds. 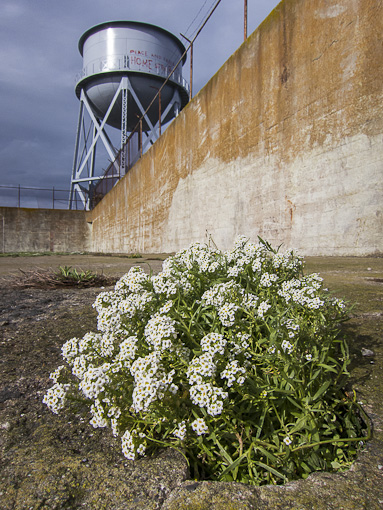 Wild flowers grow through concrete of the high walled recreation yard, one of the few places prisoners could enjoy the out doors. It is within earshot of crashing waves and a buoy bell along the island's rocky shore.


What was it like for prisoners, confined in the toughest federal prison in the country, to hear these sounds from the outside world, the sounds of freedom drifting into their grim world?

During my assignments and travels I've been recording the sounds I overhear, and many don't have supporting photographs or stories. This occasional series will be my excuse to share my audio orphans, these Sounds Overheard. Please also visit my Miami commercial photography portfolio.
Posted by Tom Salyer at 3:21 PM No comments: