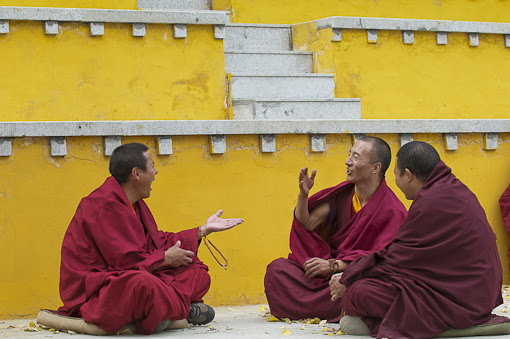 While traveling in Tibet last October, Tibetan Buddhist monasteries were not only locations to create some great photographs, but were also sources of terrific natural sound.

Today's post is short and sweet, three photos of debating monks from three monasteries, and a short recording of natural sound from one of them. 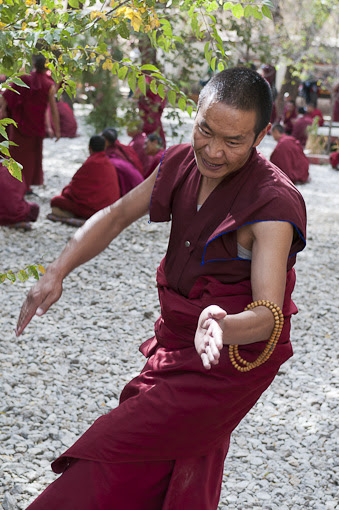 From an earlier post on this blog, a little background on the debates:

Debate is an important part of a Tibetan monk's training, and is said to help expand the mind, increase mental sharpness, develop analytical skills and help gain mental clarity. The debates follow a strict form, with the standing questioner challenging the thesis of the humbly sitting defender. As the questioner raises doubts, the exchange becomes increasingly animated, with exaggerated body language, lunging, hand slapping and loud shouting. The defender mostly sits quietly and looks away, occasionally making a counter point by waving his arm. 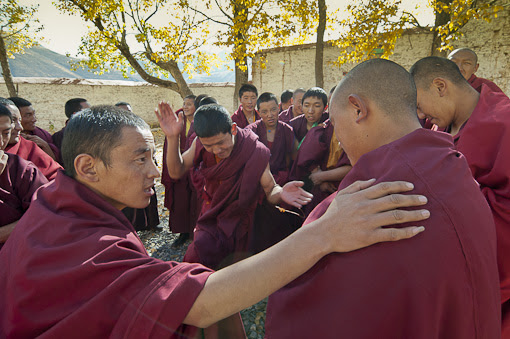 As one monk, left, encourages the defender, right, the challenger, center, claps and lunges to make his point at the Reting Monastery.

During my assignments and travels I've been recording the sounds I overhear, and many don't have supporting photographs or stories. This occasional series will be my excuse to share my audio orphans, these Sounds Overheard. Please also visit my Miami commercial photography portfolio.
Posted by Tom Salyer at 9:29 PM No comments: