I've had a lot of fun photographing portraits of orphan children living in foster care for the Heart Gallery of Broward County (FL), and like the more than two dozen other professional photographer volunteers, have felt the thrill of seeing our subjects find adoptive homes.

Upon viewing the portraits for the first time, prospective parents often report an instant connection to the child. Putting the faces of a real children onto dry case files is why over 100 Heart Galleries in the USA exist. 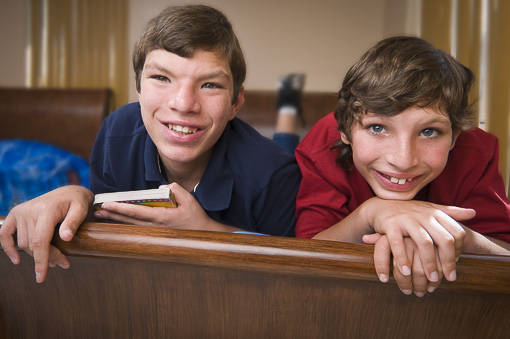 Brothers Royce and Noah paused for a rare quiet moment in the group home bed room they shared when I photographed them in 2009. Now ages 18 and 14, they've been adopted out of foster care. Born with 5 p minus, they are developmentally at 4 and 5 year-old levels.


This week I realized the handful of hours we photographers contribute are really nothing compared to the commitment and devotion required of  the adoptive parents and their children in creating new families. Heart Gallery Executive Director Barbara Schechter has written this week a newsletter story about a 28-year-old single woman who adopted two teenage brothers who have the same rare genetic disorder two of her siblings were born with. Tabitha found the boys from a photograph after ChildNet, the private agency contracted with the State of Florida to facilitate adoptions, used innovative recruitment techniques to find her.

Royce and Noah have been in foster care most of their lives. They have been photographed for the Heart Gallery and featured in Forever Family news segments several times over many years. They are gentle, sweet boys, now ages 18 and 14, but their rare medical condition, known as 5 p minus, scares most adoptive families away. People assume that their needs are more than they can handle - times two.

"Too much to handle" never even occurred to Tabitha, a single, 28-year-old woman who adopted the boys last fall. As soon as she saw their photo, she knew that she wanted to adopt them. 5 p minus, also known as Cri du Chat Syndrome, has touched Tabitha's family deeply. She is one of ten children, two of whom were born with this disorder.

5 P Minus occurs in only 50 to 60 births a year. It requires lifelong therapy, but the children are usually friendly and happy. Most can have a normal life  expectancy and lead full lives. Royce and Noah are developmentally at 4 and 5 year-old levels.

The connection between Tabitha and ChildNet was the result of some creative family finding on the part of Jessica Samuels, Wendy’s Wonderful Kid Recruiter at ChildNet. “No one ever called about these boys. I knew I had to try something different”. So she Googled and found the Five P Minus Society, a support organization for families of children with the syndrome. Jessica contacted the Society and they permitted her to submit a short article for their newsletter along with their Heart Gallery photo. The rest is the beginning of an amazing journey…

As soon as Tabitha saw the photo of Royce and Noah in the newsletter, she got on the phone to Jessica. Jessica then sent her a Forever Family video and she knew that they were supposed to be her boys. She came to Fort Lauderdale from out of state three times to get to know them and every time found it difficult to leave. Royce and Noah are much higher-functioning than Tabitha’s siblings, one of whom died right before Tabitha decided to adopt. In fact, their ability to speak and interact has brought her family close to them and created a wonderful support system for this single parent.

The boys lead busy lives that include special needs scouting and Special Olympics (three sports!). Tabitha left her job as a special education teacher to care for the boys. Her training has helped her to anticipate their emotional and social needs. They have adapted beautifully to their new life.

Gia Tutalo-Mote, of Forever Family, sums up our sentiments. “It thrills my heart to know that Royce and Noah have finally found that loving forever family we’ve been searching for. This proves once again that there is a family out there for every waiting child.

Heart Gallery Updates: Celene, the Heart Gallery teen who declared "Adopt Me, I'm Unforgettable" in an audio slide show featured on this blog in 2010, was adopted in 2011. Her friend in the video, Sheaundra, now 18, was just adopted this month, along with her now adult brother, by the same family. Laterence's adoption, featured here last September, should be finalized this month. Teenager Corey, who admitted struggling in foster care after the death of his mother, has turned 18 and "aged out" of the foster system and is out on his own.
Posted by Tom Salyer at 12:28 PM No comments: