When one of my magazine clients assigns me to create an environmental portrait, the first few minutes on location are the most nerve wracking for me. I’m thinking, I have to make somebody look great in this location.

I see blank walls, florescent lights and another drab conference room. I worry about how to set up my lights and compose my portrait in order to make something out of this nothing.

Geeze Louise, what am I going to do? 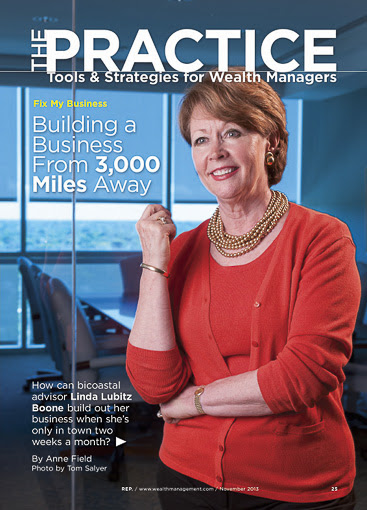 When I arrived to photograph Miami, FL, financial planner Linda Lubitz Boone for Sean Barrow at Rep. magazine, I began with the location below. 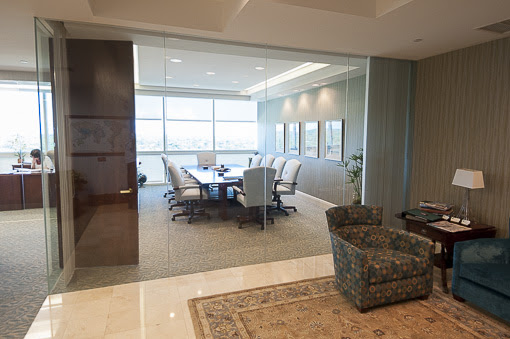 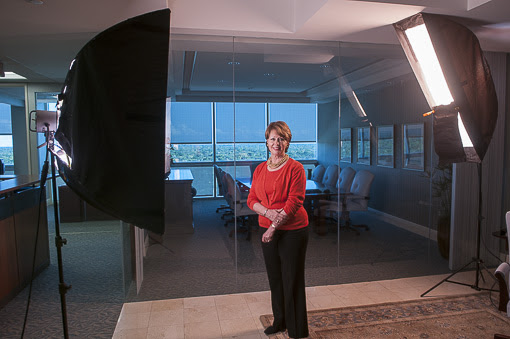 In these moments I try to tell myself that pain and angst are part of the creative process, and I must work through this challenge by methodically coming up with a photographic solution. As I work through my mental check list, I travel from panic to confident :

- What’s the story I’m telling with this portrait? Is my subject powerful, so I want to shoot upward? Are they sympathetic, and I want soft lighting and a warm color palette?

- How can I use the environment to help the story? Do I want to show the developer looking over a grand city, or Is it a personality profile where location is not important?

- Will my art director run a large photograph so I can shoot wider, and do I need to shoot tight also for secondary use or table of contents? Horizontal, vertical, room for cover lines and copy?

- Will this space allow me to place my lights where I need to?

- How can I make limited lighting gear work here?

- And I check off the details: How long may I keep my subject in front of the camera? How long may I use this location? Will my cables and stands be in the way? May I turn the overhead lights off? Will my extension cords reach? When do the lawn sprinklers come on? Will the strobes mess with the fire alarms? Does my executive wear glasses? Does he have hair or is he bald? 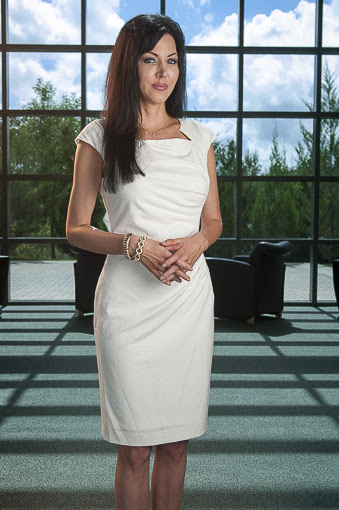 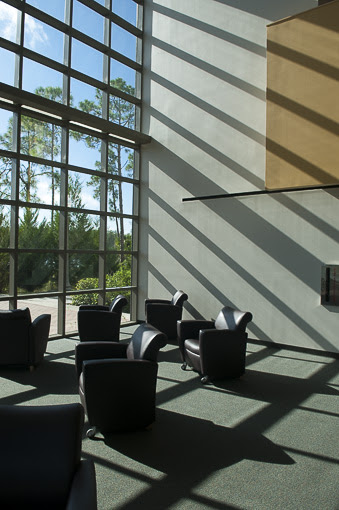 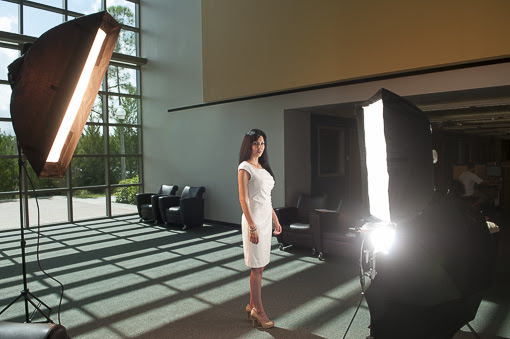 As the pieces come together and I fire off a few test frames to check on the back of my camera, my photograph begins to materialize from my imagination. By now I know that when my subject walks on set my environmental portrait will be a success.

Very important tip, nobody want’s to hear their dentist say “oops!”, so while your creative mind is panicking and stumbling, keep it inside and don’t let ‘em see you sweat.

I must admit, every once in a while I walk into a location and immediately see a terrific solution. Wonderful sunlight and shadows cascading through magnificent windows, or a grand interior with soaring architectural details. Or maybe just a prop will make my day, a model airplane or basketball, whoopee!

I accept these occasional gifts with grace and enjoy not having to torture myself on the way to making one more photographic portrait out of nothing.
Posted by Tom Salyer at 10:15 AM No comments:

The 12,000 young boys and girls kicked and thrust, their shouted responses echoed from the tall dormitories and off the concrete drill field as their instructor’s Chinese commands squawked from loud speakers. Kung Fu movements in unison as far as I could see, the children and teens were in endless formations radiating in all directions like corn blowing in the wind.

In September I was visiting the Weseng Tuan Training Center on the same day as picture day, and this being China, picture day was a BIG deal. Mr. Qin Hua was eight stores up with his Nikon to capture the assembled thousands in a grand panoramic view. I opted for a view from ground level.

The school is closely associated with the Shaolin Temple at Song Mountain in China’s central Henan Province. The temple’s legendary warrior monks date from the chaotic politics of the sixth century, when the emperor awarded favors to Buddhists with fighting skills. For centuries many martial arts traditions flourished as trade and religion between China and India flowed, with the Shaolin form of Kung Fu becoming the most prominent. 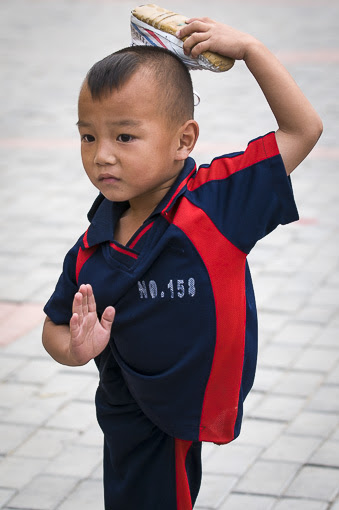 Today this blending of hand to hand fighting with Buddhist ideology continues to embrace self-defense, body-building and athletics, with Kung Fu becoming a world wide personal philosophy and sport.

Tuition, room and board at the Wuseng Tuan school is around $ 4,800 a year, a considerable sum for a Chinese family in spite of the country’s recent economic growth. Besides good basic academic education, many students hope to join the military or work as body guards. There are thousands of Kung Fu schools throughout China, all competing for a piece of a very big business. Yet the day before I saw a group of a half a dozen English speaking twenty something men and women training one on one with a saffron robed monk in the nearby Shaolin Temple. 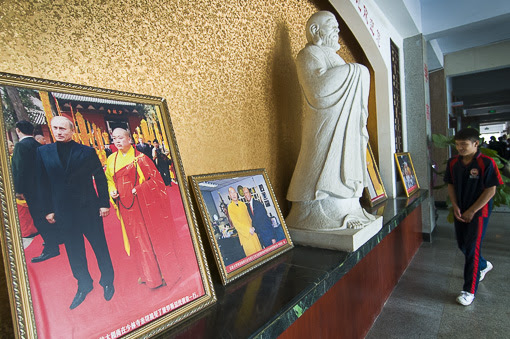 With the school enrolling 15,000 students, I was wondering where the other 3,000 were, as I had taken on face value their assertion of 12,000 Kung Fu children in front of me. Give or take a handful, seemed reasonable to me.

Just as I was about to ask, several accomplished five-year-olds were trotted out to perform for us. With just three months at the boarding school these cute tikes whipped through their foot kicking, hand chopping routine, climaxing with placing one foot behind their heads while standing perfectly still. Were the future generals of the People’s Liberation Army before me, standing like tall storks? With the world’s largest armed forces, China could always use one more Kung Fu practitioner.
Posted by Tom Salyer at 6:23 PM No comments: