When In A Jam, Bread & Butter Portrait Light


When I started learning to light environmental portraits, a more experienced photographer friend gave me some advice that has served me well ever since. Perfect one or two “looks” that you can whip out of your equipment cases in a hurry, when you are in a jam and up against the wall with little time to set up or stuck in a horrible location.

For an assignment last month for Paul DiMattia, Art Director for Business Miami, the University of Miami School of Business Administration’s alumni magazine, I utilized one of my bread and butter looks. I wasn’t in a jam, but I needed to work in a hurry, adapt quickly to changing conditions and work without an assistant. 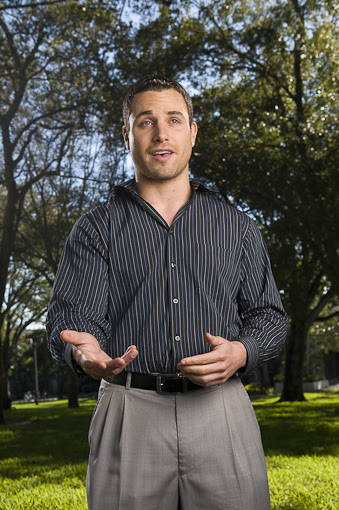 I was to meet three students at three separate times, each about a half an hour apart and in the same general outdoor campus location, creating portraits that would relate to each other and be run as a triptych.

My first light was the overall ambient coming from the late afternoon sun slicing through the heavy tree cover. By placing the students with their backs to the sun, I let God light the overall background and project a nice back light onto their head and shoulders. I underexposed the ambient a stop or so with my shutter speed, just enough to save the sparkly highlights in the leaves, but dark enough to allow my subjects to pop off the background.

The bread and butter formula called for my second light to be a medium soft box at arm’s length off to camera right just a touch and adjusted to give me nice skin tones and details in their clothing. (You need to use at least a moderate wide angle, like 35 mm, or the box will be in your way.) The box had enough angle to give me some definition by cross lighting their faces, but not to much to be unflattering. If I’m using a lower camera angle looking up, I will lower the box to keep a catch light in their eyes. I will never use the soft box from a high angle. 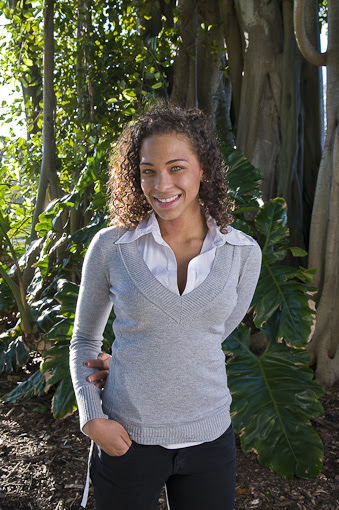 I will place the main light either left or right, depending on how they part their hair, where the sun is or physical limitations on placing light stands in a crowded spot ... or in this case, all on the same side to work in the triptych. This light could be from two thirds to a stop and a half over the ambient, first set with a flash meter, then adjusted to taste by viewing the camera’s histogram. If the soup needs more salt, I adjust to taste.

The third light was a subtle touch but a vital part of making the formula light a great light. I set it up on the side opposite of the main, higher and behind. It skimmed the hair, side of face and shoulder, helping to separate my subject from the background. A bare head with gobo made of tape and cardboard or whatever is handy helps control flair, and as it is usually a lot hotter than the soft box. I pull the stand way back to adjust it to about a stop over, depending on clothing, hair or skin color.

When I received the bread and butter light advice, I was still a staff photographer with United Press International shooting news and sports almost always on the run. What ever light and circumstances thrown at me I would work with, making the best photograph I could while never breaking the journalistic barrier of influencing the subject in any way that would not depict the truth. Sure, the very acts of deciding on a particular moment to trip the shutter or selecting what to put in or exclude from our photographs would influence the “truth” we put on the wire for newspapers around the world .

But we didn’t debate those philosophical questions very often ...  we just didn’t set up a news photos or ask someone to do something they didn’t normally do.

When I went freelance I found that portraiture for business and feature magazines was a very different beast.

Firstly, a portrait by definition is having a subject pose for the viewer and is not “truth. Yet viewers accept the fact that people normally don’t freeze with hands on hips or arms crossed in every day life, with just the perfect bit of authority, warmth or attitude on their face. And secondly, most business portraits have to be set up in order to choose an environment that not only helps tell the subject’s story, but also is artistically pleasing.

Oh, and set it up all fast because Mr. or Ms. Executive is Very Important and only has a few minutes to allow you to capture that perfect fleeting moment that distills their essence in a photograph!

Pun warning: over the years I’ve saved my bacon by pulling out the bread and butter when I’m in an environmental portrait jam.

Here's a link to more Miami corporate photography.
Posted by Tom Salyer at 12:58 PM No comments:


I've been developing a web site to show case my multimedia work, and in the process of reviewing all my projects, I've decided to premier "Chinese Breezes" here. I produced it last Fall and it's never been posted for public viewing.

Breezes showcases 53 photographs created during my first four trips to China ( 2004 through 2008 ), and reflects my candid street photographic style plus the compromises inherent in traveling while partially on someone else's agenda. I wrote about those compromises and upsides earlier on this blog.


The photographic technique I use to capture the relaxed and candid side of people from a culture other than my own is pretty basic. I show respect, smile, indicate an interest in them with body language ... the Golden Rule I guess.

My Chinese vocabulary is limited to a handful of badly mispronounced words. I can say "beer", "bottoms up", "spicy", "ice". Oh, and "ni hao" for "hello", the most important.

While in China's Inner Mongolia in 2008, I learned one word in Mongolian, sain baina uu, sorta pronounced "say ba nooh". We went 10 days without seeing a single other Western face, and often when approaching ethnic Mongolians were greeted with blank stares and open mouths. A smile plus "sain baina uu" immediately broke the ice.

And last year in the ethnic Tibetan regions of far Western Sichuan province,  "tashi dele" for "hello", pronounced by me as "sa shea daleah" worked just as well.

I really mean it, instant smiles in return.

I like to imagine my self walking down Ocean Drive on South Beach when a tall, green alien approaches me with a camera around it's triple neck ... a friendly "hello" in English would work as a terrific ice breaker. Would I sign a model release with one of those "for any use throughout the universe" clauses, well .... 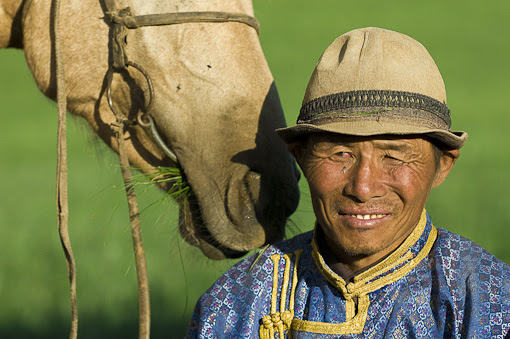 Unlike some photographers I don't automatically offer to show my candid subjects their image on the back of the camera, as I feel that breaks the flow of the moment. If they are unsure of my intentions after one shot, and I can read that on their face, then the LCD may help. Or if I've shot a lot of my new found friend, I have images in the can, then sharing may cement our relationship.

I guess stopping to show the LCD after one or two frames feels to much like the concentration breaking practice of Chimping, looking down at the screen after each and every shot. Nothing brands the scarlet C on an amateur faster.

What is Chimping, those non photographers may be asking ? The story goes that in the early days of digital, like all of 10 years ago, news photographers gathered at large events were amazed by the ability to actually see their photos instantly on the back of their cameras' tiny one-inch screens.

The sound track on "Chinese Breezes" is the first multimedia program for which I have not recorded the sound bed. The upbeat Chinese themed sound track is called "Scarf Dance", composed by Jonathan Geer of Pot Of Earth Publishing.

Here's a link to more multimedia photography from China. 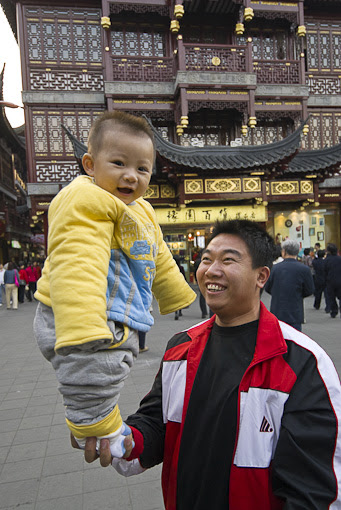 At the end of my November trip to China's Sichuan Province, we spent several days in Chengdu, a city of about 10 million people who pride them selves not only being modern and relaxed, but also the center of the distinct art form called Sichuan Opera.

I was expecting the stiff and formal opera style often associated with Beijing Opera, notably a lot of loud screeching. I was quite surprised with the program at the Shufen Ya Yun Tea House, which in addition to the opera performance featured amazing musicians and shadow puppeteers.

Wikipedia describes it much better than I -  "...Overall the art form is well known for its singing, which is less constrained than that of the more popular Beijing opera form. Sichuan opera is more like a play than other forms of Chinese opera, and the acting is highly polished..."

The show wrapped with two secretive face-changing artists, who whipped multiple masks off their faces in a blink of the eye. We were told the skill is a highly guarded secret.

I can't say I did any fancy audio engineering to capture the sound bed for my second Talking Picture Postcard ... I simply left my recorder near the orchestra pit and let it run, leaving both hands free for either a camera or a cold beer.

Here's a link to more multimedia photography Talking Picture Postcards.
Posted by Tom Salyer at 8:44 AM No comments: