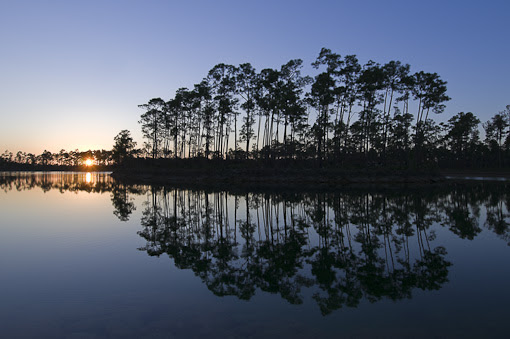 Visitors can hear an entirely different Everglades National Park after the sun sets.

I really don’t recommend visiting Everglades National Park during Florida’s summer rainy season, unless you enjoy being part of the food chain by donating blood to the clouds of incessantly buzzing hungry mosquitos.

Recently I witnessed two pale tourists wearing t-shirts and shorts driving a rental car, apparently straight from Miami International Airport as their luggage was sticking from the convertible’s rear seat. They seemed to be enjoying the drive, wind in their hair.

Listen to this natural sound field-recorded this summer as the sun set and then under a sliver of moon: 1) tree bound insects  2) multiple frog species sing  3) an alligator splashes 4) mosquitoes buzz.

They gave me a very curious look as I wadded out of the flooded sawgrass prairie, dressed head to toe in insect protective gear, carrying a shotgun microphone atop a seven-foot long pole. When I drove past the next pullout, they were dancing and swatting and flailing their arms as clouds of bugs descended upon their bare skin. Maybe I should of passed along a warning that insect repellent only makes the bugs madder? 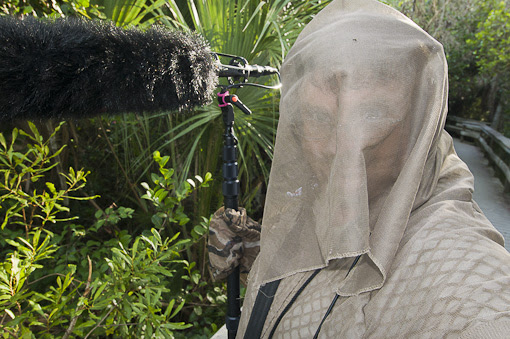 Most important summertime equipment to record nature sounds in Everglades National Park are mosquito jacket, veil, gloves and very thick pants. Bare feet in sandals would prove to be quite foolish!

Actually, being part of the food chain helps fulfill God’s big plan in the swamp: female mosquitos need blood to brood their young, their fry feed inch long mosquito fish, which feed wading birds and larger fish, which end up attracting tourists and kayakers and sportsmen to visit the national park.

Wow, quick, tell Congress that donating blood to mosquitos is really a Jobs Plan for park rangers, scientists and tour guides.The Democrats and Republicans must quit fighting in Washington about the deficit, they should come down here this summer and walk around the swamp in their underwear, baring all to the mosquitos.