My favorite kayaking destination here in South Florida is any waterway that takes me though a tunnel formed by mangrove trees, a path that almost blocks out the sky above and forces me to inch along a glassy smooth tidal creek deep in the back country.

Earlier this month I spent four days paddling the 10,000 Islands area off Florida’s South West coast, putting in either at Everglades National Park’s Chokoloskee Bay ranger station in Everglades City, or off  the Tamiami Trail in the Big Cypress National Preserve.

On a Monday I quickly paddled past the off shore mangrove islands dotting the bay and entered Half Way Creek with a rising tide, utilizing the powerful tidal flows to my advantage. In about an hour I was wrapped in a mangrove canopy completely encompassing the narrow creek, all sound reduced to my splashing paddles.

Then I heard them, two different song birds, one hidden just out of sight in the thick red mangroves, it sounded like it was right on top of me, and the second, I guessed a different species, off at a distance. They seemed to be playing a duet, one trilling upward, and a moment later the closest one singing a six note refrain.

Water dripping from my paddle was the only sound between the songs. Using my recorder's built in stereo microphones I could hear in my headphones the notes echo back and forth through the mangrove tunnel and off the water. (If you’re a real sound geek, try ‘phones to hear the separation, water drip and mosquito buzz.) Then the birds flew off, leaving me in complete silence.

Halfway Creek flowed into the Left-Hand Turner River, and finally the mangrove cover opened up to small shallow ponds where sunlight rippled through tannin colored water, and when I entered Turner Lake, I paddled blue back country waters.

Turning South onto the Turner River I rode the outgoing tide back into Chokoloskee Bay, already missing my intimate mangrove tunnels and their hidden singers

Here's a link to more multimedia photography Talking Picture Postcards.
Posted by Tom Salyer at 10:15 AM No comments:

Multimedia Drives “There’s A School For That” Campaign


Hopefully by watching you will see how Senior Melissa’s words and passion personalize the entire high school. The show is 2:14 long, and a larger version may be viewed here.

Archbishop Curley Notre Dame, a Christian Brothers’ college preparatory high school here in Miami, is making these shows the centerpiece of their “There’s A School For That” recruitment and marketing campaign.

With school and parent’s finding the economic downturn impacting their budgets, and educational alternatives competing for their prospective middle school applicants, ACND hopes to raise their current 302 enrollment closer to 400, a number that can be educated at the same cost, thus alleviating some of the financial pressure. 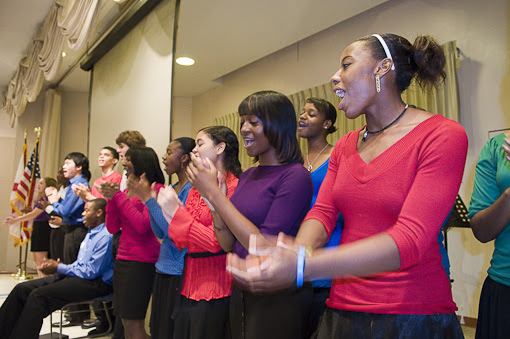 ACND, in Miami’s Buena Vista neighborhood alongside Little Haiti, offers students in grades nine through 12 a college preparatory curriculum in a Catholic environment, and for decades has been a leader in inclusiveness. In 1960 they admitted their first African-American students, the first Florida school to do so, while surrounding Miami-Dade County public schools were not integrated until ten years later, and then only by federal court order.

I’ve written here before that I’m really excited about how multimedia that combine journalistic photography and interview styles give audiences a fuller, more compelling experience than any one of these elements could by themselves, either on line or in print. 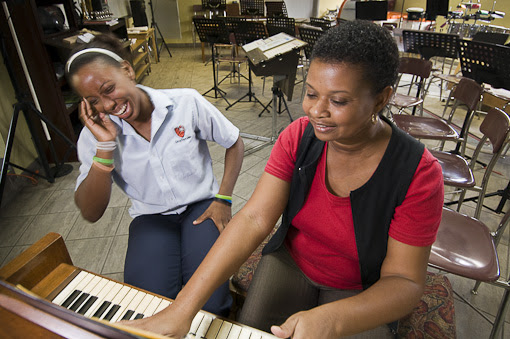 By attending ACND Melissa found she really loved to sing, and music director Daphne Dominique’s personal attention nurtured her talent. In four additional shows that I will post here in the coming weeks, a quarterback relates how his coach taps each student’s best, a student tells how friends help him academically, a student leader blossoms and a brand new freshman is just plain happy to come to school every day.

Principal Brother Patrick Sean Moffett, CFC, challenged me to capture one key aspect of each selected student’s excitement about the school. I needed to tell each story with a handful of sentences and a couple of dozen photos, plus a bed of ambient sound for depth and realism.

With running times between 2:04 and 2:24, each show required five to six days of work ... about a half day of interviewing, a day and a half for photography and ambient sound recording, and then at least three more days in post production computer time editing the audio and photos, assembling into the slide shows and processing for output.

These shows will reach ACND's prospective students, their parents and supporters when featured on the school’s web site, distributed on flash drives as pod casts, shared as videos via social media sites and played on TV screens at events.

I must thank Brother Moffett and his staff for their help producing these projects, including Public Relations Coordinator Katherine Doble and her Barry University intern Homma Rafi, Vice Principal of Student Services Douglas Romanik, and Secretary to the Principal Daphne Dominque.

More multimedia work can be viewed on my new Miami Multimedia Photographer portfolio web site.
Posted by Tom Salyer at 7:15 PM No comments: