When “Mike” promised to take me to a quaint little village - “many good pictures you like for sure” - situated on the outskirts of the crowded, polluted and generally not quaint provincial capital of Sichuan Province, Chengdu, I said yes.

I met Mike while I was soaking in the peace and quiet of the Wenshu Monastery, an oasis within a metropolitan area of 14 million Chinese. He was there trolling for a days work as a tour guide. After nearly three weeks of travel in China and Tibet, I was pretty worn out with photography, but was game for one more day. 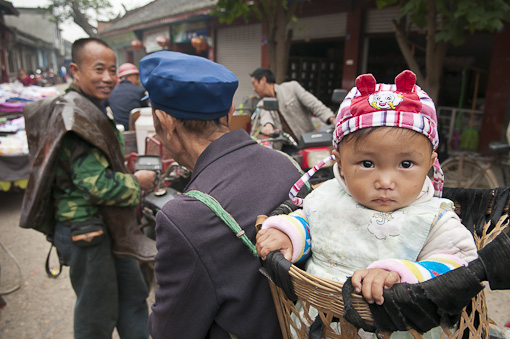 Like many Chinese, Mike has adopted an “English name” for the sake of us visitors who are unable to get our Western tongues around Chinese names. He was 40 ish, wore thick glasses and scuffed shoes, and presented a hand written then Xeroxed business card listing about a dozen talents. But he was charming and full of stories of all the photographers he had escorted into hidden Chengdu. Back stage at the Sichuan opera, he suggested. Sorry, I’ve done that. Visit a religious person in their private quarters, thanks, I’ve had tea with a monk and cookies with a nun. Visit a picturesque farming village untouched by urban sprawl?

Ok, why not? I really didn’t expect a People’s Paradise, but I’ve made interesting photographs all over China in pretty drab surroundings. Safety, going off with a stranger? No problem, I was traveling with three women friends, they would protect me.

As the next day dawned with a drizzle washing the pollution from sky to street, a tiny rattle trap van wheezed up to the hotel, our private car with driver for the day. Mike was riding shotgun. No seat belts, but they would of just transmitted more discomfort from the vehicle’s frame, which had no springs nor shocks. 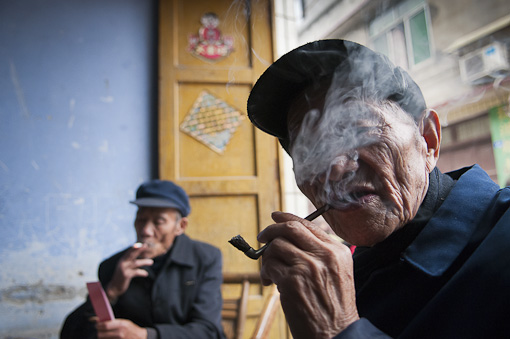 We drove over an hour, past the modern skyscraper skyline, down the eight lane highway, then way out two lane roads through farm fields being bulldozed for housing. A dirt track led to an old stone bridge spanning a muddy brown river. As we pulled into the village, a woman pitched a bucket of kitchen scraps into the waterway from a house overlooking green fields.

We were in luck, it had rained all night, so the village wasn’t the least bit dusty, only muddy, and it was Saturday morning, market day! We plunged into the crowd and worked our way along the single street running above the river. Everything was for sale, onions, nuts, pet fish, clothing, live ducks and cheap electronics. Between vendors, customers and strollers, the entire town had turned out this morning. Coffee shops were full of mahjong players, smokers in blue Mao jackets puffed on hand rolled cigarettes stuck in long pipes, and mothers carried their “one child policy” children dressed in their cutest outfits.

Mike knew everyone, or at least he let on that he did. We were introduced to the smokers, the barber, the old lady crocheting in her kitchen goods stall, Mike was best friends with them all. It was fun watching him act important, and it helped to have someone breaking the ice with each group of new faces around the next corner. 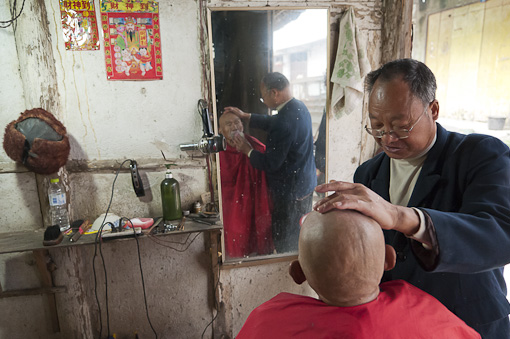 Market day brings man in for head shave, while his warm cap awaits his departure.

And around those corners the drab little village yielded photographs, slowly, one by one. I kept an open mind, smiled and interacted, caught those passing moments that told a story of this village on this market day under this gray sky.

Lunch at the open-onto-the street kitchen was Mike’s triumph. With great flourish, insight and experience he ordered dish after dish for our group. Spicy noodles, tangy chicken, steamed vegetables, cold beer bottle after bottle, all witnessed by the market visitors with sufficient money to dine at neighboring tables. The rest of the market streamed by to check us out. (Editors note, the driver only had one beer, Mike saw to that.)

As the dishes arrived, one by one he educated us on their ingredients and flavors, and eloquently complimented the restaurant’s owner and her chefs. So much food, we worried! No worry, Mike and the driver set to work, clicking chopsticks and slurping soups, they kept going long after we were full. Obviously this was a banquet for the two of them, a tour guide perk, even though it only cost the four of us about $ 6 each.

Mike peppered us with questions about current events in the United States, and was obviously well informed. What did we think about the log jam in Congress? European debt crisis? President Obama’s relationship with President Hu? Between flying noodle and rice, “what you think about” ... sports, popular music, social media. Whew!

It was quite a day, our “picturesque” little village and our new best friend, “Mike”.

The last I saw Mike, he had just peeled off several large Yuan notes for the driver, and was walking off through Chengdu’s pedestrian crowd counting his money with a big smile on his face. 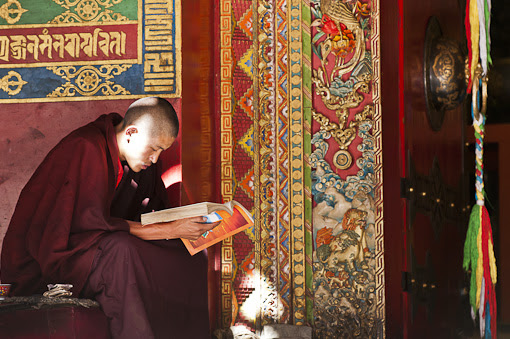 Traveling requires all of your senses to fully experience your surroundings, whether they are in exotic Tibet or some place closer to home, like the dusty strip of sprawling gas stations, fast food joints and mini marts you've stumbled upon after getting off the interstate highway.


Listen to one minute recording as birds chirp and large brass temple bell rings, then to nomad yak herders in outdoor market shopping for bells to hang around their livestock.


Stand still for a moment in front of that mini mart and listen ... traffic and horns assault you, sure. Wait a moment, between traffic lights, those little chirping birds, probably sparrows, hopping around the trash filled hedge. Gee, they are pretty sounding. Hear the salsa music wafting out of that bodega over there, that sound adds some more color. A nice gentle breeze rustles the tree leaves above your head, a bossy black crow barks down from atop the power pole.

Listening to the details, sometimes loud, sometimes subtle, makes this place, this very moment in time, much richer to you. OK, I know, the light has changed and this spot is getting just plain loud, so lets relocate to Tibet. Poof!

Now we're standing under a foot tall brass bell, green with age, hanging from colorful braided cords from the hand hewn rafters of one of the Tibetan Buddhist temples in the Thasilhunpo Monastery. Founded in 1447 in Shigatse, Tibet's second largest city, the monastery is both very quiet and very full of sound. Pilgrims jump with outreached finger tips to ring the bell hanging just out of reach, rich tones reverberating and fading into background sound of happy birds chirping in the sunny courtyard.

An hour later we're visiting the outdoor market in busy downtown Shigatse, and are eavesdropping on two men dressed with red cloth braided into their long hair, silver jewelry around their necks and on their fingers, staying warm in sheep skin jackets.They are test ringing inexpensive bells to hang around the necks of their livestock, some as big as their fists for yaks, some walnut sized for sheep.

Listening carefully can enrich our travel experiences no matter where we are. Now let me decide, do I stay in Tibet, or Poof, I teleport back and dig into a lime green Double Big Gulp at the mini mart?


More stories from Tibet are elsewhere on this blog, and more examples of field-recorded natural sound are at my Miami multimedia production portfolio site.
Posted by Tom Salyer at 1:35 PM No comments: