Pilgrims Walk Around Roof Of The World 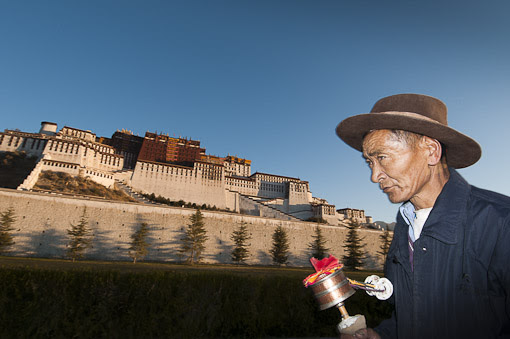 Just as the sun rises this morning, a Tibetan Buddhist pilgrim makes the miles long circuit of the Portala.

As you enter Barkor Square and approach the Jokhang, a temple and monastery that is the most revered building in Tibet, these random pilgrims join the hundreds and thousands circling the building to form a human river of devotion. Little old ladies, families with tiny babies strapped to mother's back, Buddhist monks and nuns in yellow and purple robes. Traditional Tibetan dress is interspersed with members of  Chinese and Tibetan middle class in slacks and sport shirts.

Every beed fingered is a prayer, as is every every circuit of a sacred site. The prayer wheels are filled with dozens of tiny paper prayers hand printed by nuns, so every swing of the drum multiplies the  prayers. 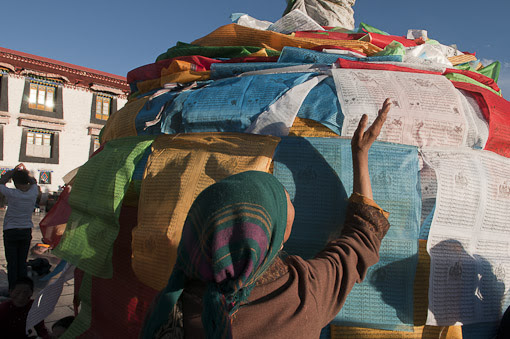 At the setting sun reflects from the  Jokhang yesterday, a woman caresses prayer flags draped many feet thick around a stupa at the edge of Bokhar Square.

Sadly the Jokhang, built in the seventh century century, no longer houses monks nor services since 2008 when the Chinese authorities shut them down after the bloody rioting in Lhasa. It is now an important government "cultural relic".

Now you see army troops on every surrounding roof top, security cameras, eight man squads carrying automatic rifles and riot helmets marching around the square at regular intervals, and you encounter random patrols through out the central city. The up side is I never worried about being mugged. 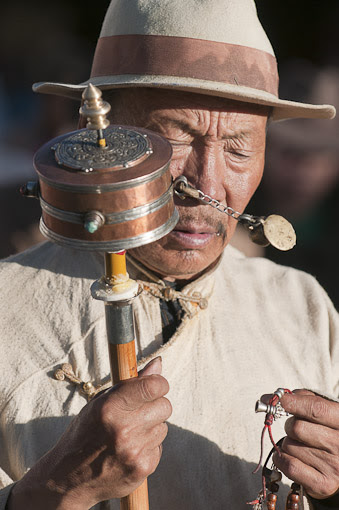 A devoted pilgrim in a sea of thousands circling the Jokhang last evening.

Visiting the towering Portala, featured on every picture postcard from the Hermit Kingdom,  is not nearly as vibrant a human experience. As if your low land lungs weren't having enough trouble at nearly 12, 000 feet, you must climb, one ancient stone step at a time another 150 yards. Your prize at the top is to be one of 3,000 daily visitors that are allowed to shuffle from one amazing room to another, all within the government mandated one hour limit.

Yet the Portala is a truly amazing site. I was impressed by how small the former Dali Lama's private prayer quarters were, about the size of a small hotel room, rather modest for the political and religious leader of Tibet who is also a living God.

These are a few quick impressions of  my first three days in Tibet. Hopefully I'll have time and internet connections to post more in the coming weeks.