We were traveling along a rutted dirt road down the Riteng Zang valley, framed on both sides by distant blue mountains, with a silver river reflecting the sun about a mile off. The October dry season had parched the hills a deep brown, the grass even browner, as dust rose from the pilgrim's full-body prostrations as they inched along the ground toward Lhasa. 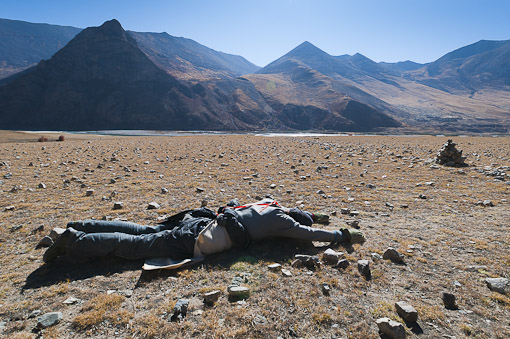 The six pilgrims would take two steps, about one body length,  drop to their knees, then both hands, protected by wooden and metal paddles, would touch the dirt as they slid down fully onto their stomachs. Forehead tapping the ground, their hands would swing an arch in front of them in the dirt. Stand up, take two steps, down on the ground as they maneuvered through the rocky terrain.

For these six pilgrims,  young men and women mostly in their teens and early twenty's, they had been traveling this way toward Lhasa for the past four months, covering about 150 miles so far. Four more months will be required to complete the final 150 miles, where they will eventually circumambulate the Jokhor, Tibet's holiest temple and monastery. 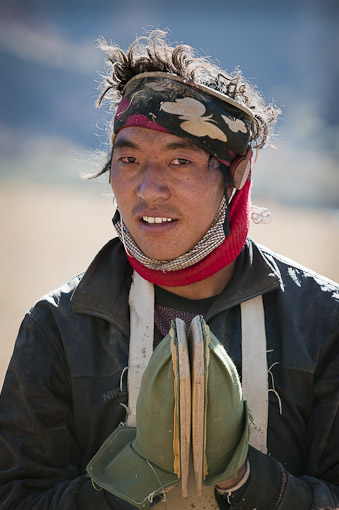 Pilgrim protects hands with wooden paddles, and wears thick canvas apron with padding that hangs down to his ankles.

Throughout Tibet you see such pilgrims along side the roads and highways, and where terrain does not allow it, they are on the paved roadway where trucks and cars quiz by at high speed. Depending upon terrain, weather and their stamina, they can cover around six miles a day. This group of pilgrims had an advance truck festooned with giant prayer flags carrying their  food and camping gear. Other groups pull a small two wheel cart along with their earthly processions.

Leaving their  home lands in the far reaches of Tibet, pilgrim groups often pass through two mountain passes on the way to Lhasa, the Sera Gola and the Kana, both about 15, 000 feet in altitude. Winter weather drops temperatures to double digits below zero.

Pilgrims are drawn to countless sacred locations in Tibet,  special lakes, mountains, caves and temples, and groups traveling together toward Lhasa will visit as many destinations as possible along the way. They perform a kora or circumambulation of the devotional location, leave offerings of yak butter and paper currency, chant mantras and ask for blessings from the monks.

In Tibet a pilgrimage is not as simple as walking toward your sacred destination. It is considered a great privilege to complete a pilgrimage through full-body prostrations, which focuses your concentration to every step taken, every mantra repeated.

To view more examples of journalistic photography from China, please visit my Miami commercial photography portfolio site.
Posted by Tom Salyer at 6:04 AM