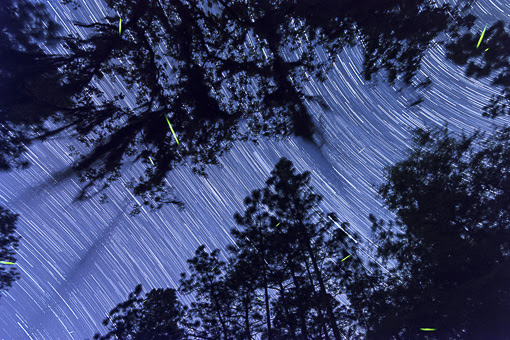 While processing master files for submission to my stock agencies this week, I had fun creating variations of a favorite starry night photograph from my camping and kayaking trip to Suwanee River State Park in North Florida. I wrote about the April trip earlier. Which version do you like best?

In this basic night sky technique you take a number of still photographs where the stars are rendered as distinct points, and one by one in Photo Shop stack them one upon the other, the result being star trails as the earth turned during each time exposure. It's really not that complicated, as if I can do this, so can you!

Process you time exposures to taste, convert to Tiff or Jpeg and place in a folder. This won't work with RAW images, BTW.

First download this cool and free action from Chris Schur and put on your desktop. Load it into your version of Photo Shop by clicking on the Actions Pallet upper right fly out menu > Load Actions. Then in Photo Shop on Tool Pallet set Background Color to Black. Create a blank all black image  File > New > set to exact size of your star photos > Background > Background Color.

With the all black file open,  File > Automate > Batch and choose your folder  > Play > the Star Trails action, and let it run.

The action places each photo on a layer, sets Blending Mode to Lighten, flattens, and repeats. Lighten allows just the brightest pixels to show through the stack.

When I stacked five hours of star points the sky was just to bright, so many stars had trailed by over time. I experimented with less time, and the result above is from about 50 images taken over about a half hour.

Among the many techniques available, the simplest is using Apple Quick Time Pro, about $30. File > Open Image Sequence > choose folder > sit back and let it run. There are options for choosing frame rate, codex and the like.

I use Premier Pro as I find it very simple also. Project Panel > Import or Double Click on grey > choose image folder > select the first photo > check Image Sequence box > OK. Premier very quickly brings in all the photos as an Image Sequence, which you simply place on your time line to be edited like any other video.

BTW, photos in folder must be named sequentially for this to work. Somewhere I had managed to throw out one or more of my 621 stills, and the Image Sequence import would hang up. My eyes went buggy searching for the missing file, so finally in Light Room I made a Collection of the 621 images, and in that collection I renamed them 0001 to 0621 in the Library module. After Save Metadata to the exported folder, it worked! 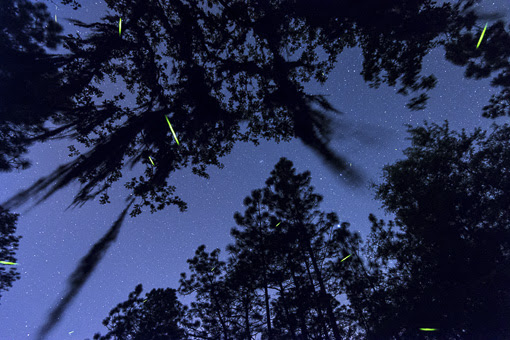 I layered eight photographs on top of each other, painting away all but the lightening bug streaks on the top seven, revealing the distinct star points from one 30 second time exposure and all the bug fly bys over six hours.

This is basic Photo Shop compositing technique, which I rarely use for journalistic ethics reasons, so readers may know a simpler way to do this.

In Light Room's Library module, I chose the eight photos that had green streaks from lightening bugs flying during the 30 second time exposures, processed and placed them in a folder. I manually stacked them one on top of the other as separate layers, then turned visibility off for all but the bottom two layers. I clicked on the Layer Mask icon for layer two, choose Black as a foreground color, then a brush, and painted everything on the top layer away except the green streaks. Now I had the first photo's stars, trees and green, plus just the green of the second layer. After painting in the green for all layers, I flattened the stack and was done. 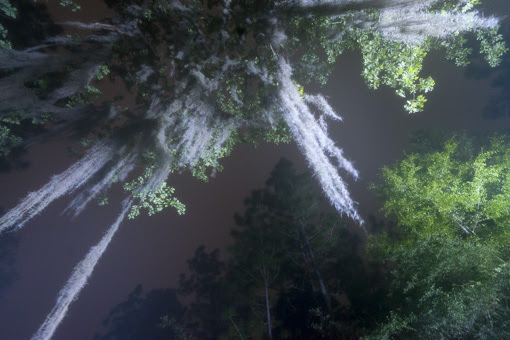 During 30 second time exposure I painted my head lamp around fog shrouded forest.

The last technique was to fiddle around at 330 AM once the fog rolled in and obscured the sky, I simply took my head lamp and painted cross light onto the trees and moss while the shutter was open.
Posted by Tom Salyer at 4:27 PM