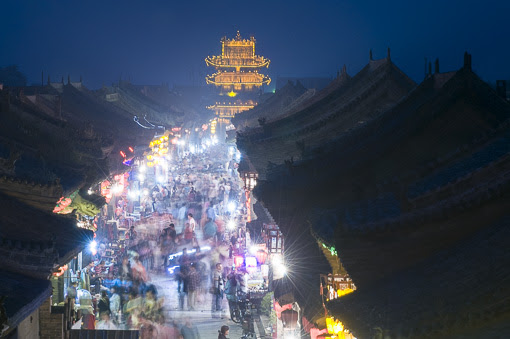 At dusk the 14th century Market Tower rises from cobblestone streets teeming with people in the Ancient City of Ping Yao in China's Shanxi Province in September.

iPhone & iPad friendly link, or if you've received an email without audio player.

Considering only pedestrians and pedal powered bicycles are allowed into the central core of the ancient walled city of Pingyao, an amazing tapestry of sound is generated in this city of 50,000. Not ear shattering New York City jack hammer and subway loud. But just as enveloping ... shouting vendors, crackling fireworks, banging gongs, sizzling woks, bicycle bells, conversations soft and shouted. Here sounds are every where, sharpening your senses, your eyes noticing more detail, your nose discovering new flavors wafting on the air. 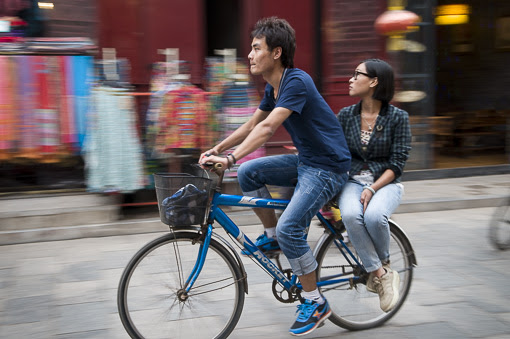 When the magic hour arrives at dusk, the sky goes from deep blue to black and the red cloth lanterns twinkle on in the restaurants and shops, there is no quiet spot within these stone walls built over 500 years ago.

It's due to the hordes of Chinese and foreign tourists and businesses catering to them. So many visitors flock to what are considered among the best preserved city walls in the world - Pingyao is a UNESCO World Heritage Site - that rampart tourism and development are considered a major threat. 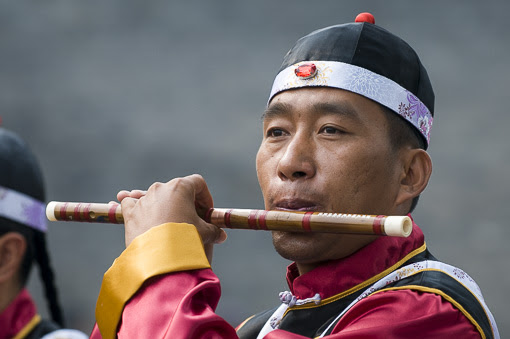 Costumed musician plays bamboo flute below the South Gate in the 6,000 meter stone wall that encircles Pingyao, which is about 450 miles West and a little South of Beijing.

Don't let the crowds discourage your visit, there's lots of room. What fun being a fly on the wall among the throng, people watching, recording sound and taking photographs. If those pursuits aren't enough entertainment, then a $5.00 foot massage lasts almost an hour. At a street side table a large bottle of warm beer is 75 cents and great dinner of stir fried pork and eggplant a few dollars more. The pandemonium becomes background music

I never experienced a quiet and calm Pingyao. I suspect there's an hour when the nightly hubbub dims as the shops and bars close and visitors stroll off to bed. Probably when the sky brightness early in the morning the streets are momentarily quiet as the city regains it's strength, soon to murmur back to life. Preparing Mahua, a friend dough twist cooked in peanut oil, on the sidewalk of the Zhauji family shop.

During my assignments and travels I've been recording the sounds I overhear, and many don't have supporting photographs or stories. Well, today there's a short story and a few pictures. This occasional series will be my excuse to share my audio orphans, these Sounds Overheard.
Posted by Tom Salyer at 9:52 PM