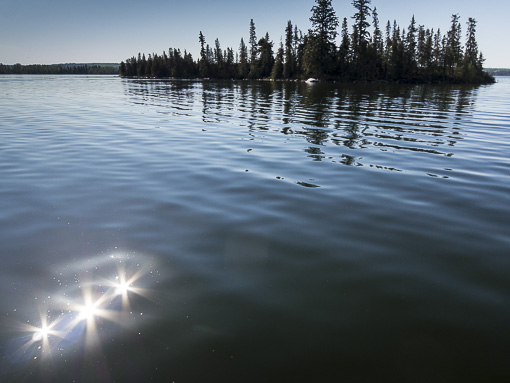 All the Canadians I met earlier this month were awfully nice and friendly, and I know they often vacation down here in Florida when the winters get to be 40 degrees below up north of the border. But do they chuckle at the sound of our Florida names, Miami, Okeechobee, Apalachicola or Boca Raton?  Translated to “Rat’s Mouth”, that last one even makes me smile.

While fishing a couple of weeks ago at Dore Lake, located north of Saskatoon ... giggle ... I just loved the sound of Saskatoon, and spoken with the province Saskatchewan, I enjoyed the geographical mouth full every time I said them out loud. 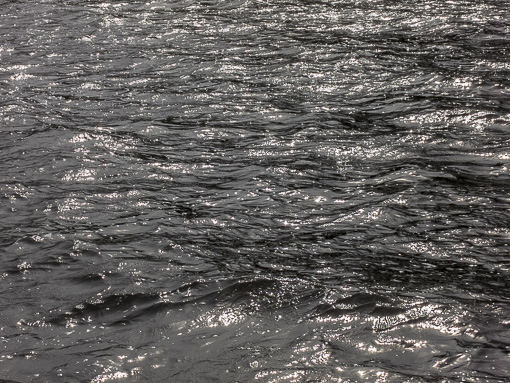 For years my brother in law Jo had been telling me about his annual fishing trip, a group of 18 mostly men from the Colorado Springs area that have been making the 1250 mile trek for 29 years. Jo finally talked me into joining them this year, even though I hadn’t been fishing since I was a Boy Scout in Idaho. I flew to Colorado, and at 4 AM the next day we loaded up his Toyota Tundra CrewMax and headed out for Canada.

I guess I never really looked at a map before we left. We drove north through Colorado, across eastern Wyoming, to spend the night in Miles City, Montana. I had forgotten how wide and open the western United States is, mile upon mile of rolling grasslands, oil wells and on occasional town. As it was late Spring, everything was a pretty green. The next day we drove and drove, over Lewis and Clark’s Missouri River, crossing into  Saskatchewan where the border was a thin wire fence marching across wheat fields. In Saskatoon ... giggle ... we spent night two. Not there yet, as we couldn’t check into camp until Noon. So on day three, after a leisurely breakfast, we entered the boreal forest. Boreal forest? Are we in the neighborhood of the Arctic Circle? Are we there yet? Startling a bear rooting for tender greens, we finally reached the dead end of a 65 mile dirt road and emerged at Dore Lake Lodge. 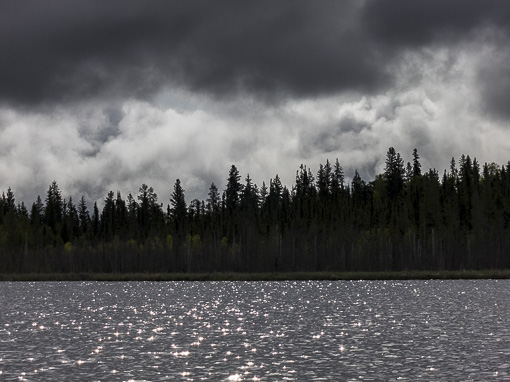 I suddenly realized that this trip was the equivalent of asking some of my buddies to go fishing, we just need to drive from Miami to New York city over three days!

I soon found out why this crazy group of fishing buddies drive this far. The fishing was terrific! Within minutes of casting onto the lake I was reeling in Northern Pike as long as my arm. Throw ‘em back, I was told, that’s to small. Sure enough, bigger fish were out there, including some delicious walleye. Even though I didn’t win the $80 pot for the largest fish of the week, I caught fish every time, trolling the deeper holes or casting into the weeds, rain or shine. One of our group brought in, and then released, a 31 pound pike. Lots of 8 to 12 pound walleye. As we could only keep six fish each for the week, other than the ones we ate, it was catch and release all day long. 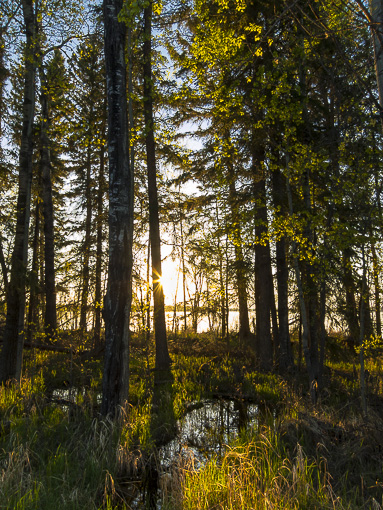 Jo was chief cook and his cabin was the mess hall where we gathered every evening for liquid refreshment and tall stories of monster fish which got away. Some of the crew were younger than me, including two teens, a very competitive brother and sister and their taxidermist dad. But most of the fishing buddies were long retired, a former Catholic priest, an ophthalmologist, weather scientist, accountant, long distance truck driver, a jet fighter pilot. A fun group with lots of stories. Did I mention the lying about big fish?

As I was the new guy, I steered away from the potential controversy of politics or religion, yet on the last night mentioned to a dinner companion my lifelong membership in one of the two major political parties. The genial white haired gentleman, who had spent hours in my boat teaching me the finer points of fishing, growled “If we had known that sooner, we would of cut you up for bait!”

Between spirited fish strikes, beaver and bald eagle sightings, I shot a few photos and recorded a little sound and soaked in Dore Lake’s wide open skies. Will I go back fishing next year? Definitely, but I just might fly to Saskatoon ... giggle ... and skip most of the drive.
Posted by Tom Salyer at 8:38 PM