Holding the snub nosed .38 caliber Colt Cobra revolver in my hand, I expected to feel the weight of history slam down hard. This weapon was used to murder the assassin that shot JFK. Gripping it’s handle firmly, resting my finger on the trigger, sighting down it’s short barrel,  the gun didn’t seem all that special. At first I felt nothing exceptional. 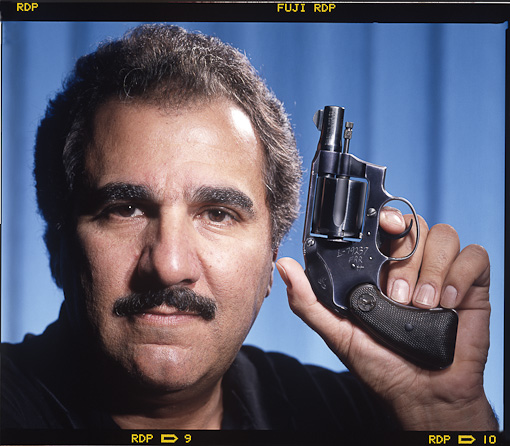 It’s flat black finish was worn away on the edges. Crude numbers and letters scratched onto the flat metal near the chamber scared the handgun.

The letters were initials, I began to remember, the initials of the Dallas police detective investigating a shooting. The detective placed his notation on this revolver himself,  days after the nation reeled from the killing of President John F Kennedy. This very weapon I now held was connected to one of the greatest chapters of United States history.

Finally the weight of history caught up with me ... cringing, I set the infamous item down gently onto the conference table.

November 22, 1963, the President is shot while riding in his open top limousine, dying in his wife’s arms. Hours later a suspect is arrested, Lee Harvey Oswald, and booked into the Dallas police headquarters. Two days later, a local night club owner, Jack Ruby, freely walks up to Oswald, pulls this .38 caliber Colt Cobra revolver from his pocket and shoots Oswald in the abdomen, killing him.

Like most Americans alive at the time, I remember where I was when I heard of JFK's death. Seventh grade class, Mountain Home, Idaho, the announcement crackled across the loud speakers. As school closed early, my classmates and I were stunned, not really understanding what the news meant. I remember flickering black and white television images of the Oswald shooting and from JFK's funeral. Holding Jack Ruby's revolver I shivered as it physically connected me to this awful history.

Wearing this hat, holding this revolver loaded with these bullets, Jack Ruby was photographed the split second he shot Lee Harvey Oswald on November 24, 1963.

History and childhood memories were on my mind in the conference room of South Florida real estate developer and memorabilia collector Anthony Pugliese in the Fall of 1993. I was on assignment for Newsweek to photograph Jack Ruby’s gun, the hat and shoes he was wearing during the shooting, bullets from the revolver and telegrams sent to Dallas police supporting Ruby.

Mr. Pugliese simply handed my assistant and me a box with the items, told us to take our time, and left us alone in the room. As alone as one could be with the full weight of this terrible history bearing down. The photos ran on the 30th anniversary of the assassination.

When I realized another anniversary would be arriving next Thursday, the 49th since President Kennedy’s death, I recalled the Newsweek assignment and found the original color transparencies. Shot on my beloved Mamiya RZ67 medium format camera, the 6X7 format transparencies were in an envelop unceremoniously labeled “Ruby Gun”.  As I laid the ‘chromes down on my light table, I realized I had forgotten the tactile feel of film. The images were three inches wide and sharp as a tack, their colors glowing back up at me. We shot the portrait with a 180 mm tele, wide open, and the still life with my favorite lens, a 50 mm wide angle, lighting with several tight grid spots.

History Update - Jack Ruby, whose conviction for murdering Oswald was overturned,  died of cancer in prison awaiting a new trial in 1967. So technically, he is innocent. The Warren Commission concluded both Oswald and Ruby acted alone, but conspiracy theories persist to this day. The snub nosed .38 caliber Colt Cobra revolver was put up for auction in 2008, but prices did not reach expectations and it did not sell.  The sale was to help finance memorabilia collector Anthony Pugliese’s plan to turn Florida scrub land into an Eco-sustainable city. The Destiny project vaporized with the real estate crash. This October Pugliese was charged with money laundering and fraud in that development plan.
Posted by Tom Salyer at 3:47 PM No comments: Links to this post