When I put together a multimedia presentation my goal is to combine still photographs with audio interviews and natural sound that give the viewer a fuller, more compelling experience than any one of those elements alone could do by themselves.

Story telling photographs can stand on their own quite well, say in a daily newspaper, as can an audio interview of the subject broadcast on the radio, yet the marriage of the two through multimedia on your computer screen or even as a podcast on your tiny iPod screen seems to present more information in a lot more exciting way. (If mentioning newspapers and radios in the same sentence dates me, well, so be it.)

Hearing the story subject speak in their own voice lends more legitimacy to the photographs, and photograph of the speaker places the voice in context ... the viewer can trust as real what they both see and hear.

And in my opinion adding a bed of natural sounds underneath the photos and interview adds a fourth dimension of spice, texture and realism to the presentation. Ambient sounds makes the entire dish sizzle with reality, like smelling the aroma of the chef’s creation as final proof the food is real.

I’m very excited about my latest multimedia project from my November trip to China’s Sichuan Province, 72 photographs with two dozen field recorded sound clips combined into an audio slide show. Relying on only natural sounds and no interviews, here is the three minute 20 second show.

You may ask, why not just shoot video ? The best answer is that I play to my strengths of being an experienced still photographer and a good listener. I know how to capture story telling moments in time as a photojournalist and portrait photographer, and understand how to blend photo selection, point of view and sequencing to linear story telling in multimedia. 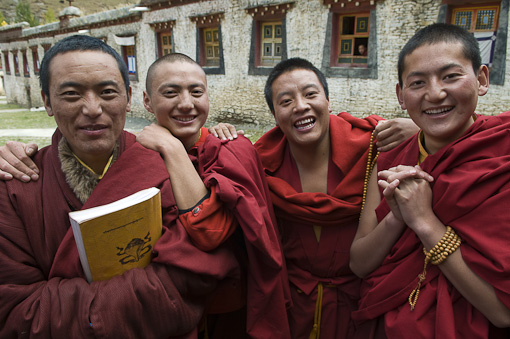 And I’m finding recording audio in the field very fulfilling, as I’ve blogged about before here and here.

Both of these skills I can be good at on my own, a one man band in the field. Please note that good photography and good audio are two separate and equally important jobs. To do each one well requires close attention to creative and technical skills, so balancing both in the field is a dance of compromise.

At the Tagong Temple I was recording a monk playing drum and cymbal, and through the window could see more monks outside in the courtyard playing shell horns, a great photo. Grrrrr. But I had to remind myself to be happy with the moment, and I did record some great sound.

But with video, life becomes a lot more complicated. There is a reason they have “video crews”, with producer, director, director of photography, sound tech, camera operator, gaffer, caterer and on and on. And once it’s shot you need narration, music and full scale production services. Should a client need video, I partner with those who specialize in these areas.

On my own in China, I’ll keep it simple and keep listening for photos and looking for sounds.

Here's a link to more multimedia photography from China.
Posted by Tom Salyer at 11:12 AM No comments: Links to this post


A recent conversation with my teen aged daughter got me thinking about the bulk of the photography I do, shooting environmental portraits for magazines and corporations. I guess I’m really a problem solver, creating interesting photographs of people in usually very uninteresting surroundings - making something from nothing - and it’s a lot of fun.

I’ve been working on a multimedia project my daughter’s high school, which I will report about here soon, and some of her friends saw me on campus and asked her at lunch what I did for a living. When she answered that her dad was a photographer, they all said “Cool !”, implying an understanding that in our society photography is glamorous.

But I don’t shoot celebrities, professional athletes or rap stars, nor do big name travel magazines assign me to photograph tropical islands. My work is not glamorous, as a case history of an executive portrait shoot in a dingy warehouse will demonstrate. 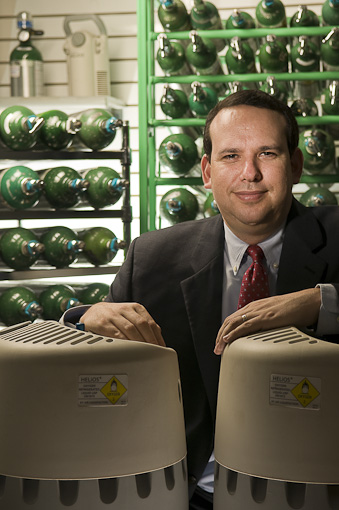 My assignment was to create a compelling cover photograph of Rob Brant, owner of Miami’s City Medical Services, for Ascend Media’s HME Today, a small trade magazine covering the Home Medical Equipment supply industry. Rob had been very active in the trade’s effort to stay above the Medicare national billing fraud scandals plaguing a tiny portion of the industry, with Miami-Dade County being ground zero for hundreds of millions of dollars of government losses.

My photographic challenge began as soon as Rob showed me around his small warehouse situated in an industrial district. At first brush there were nothing interesting visually to work an environmental portrait around, with shelves and tiny passages jammed to the concrete ceiling with jumbles of wheel chairs, medical beds and breathing machines. There were no clean backgrounds, no sexy piece of medical machinery to set my composition around.

Poking around and scratching my head on my own for half an hour, I finally discovered two heavy racks of green oxygen bottles almost hidden in the corner by a garage door. At that point I was grateful for any color, and green caught my eye, as did the repetitive pattern offered by the storage racks. And the oxygen related to Rob’s business.

With warehouse staff help we dug the racks free and filled in the empty spaces with bottles from around the building. Now I had a background with potential visual interest, stuck in a dark corner. 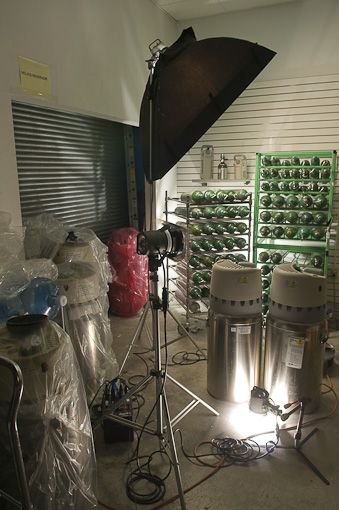 I placed my first flash, a bare tube on a short stand behind the racks and against the cream colored wall, a space of only a few inches. A bare tube is simple flash unit about an inch in diameter and six inches long without modeling light, reflector or cooling fan, with a long cord attached. They are a lot of fun to hide and insert light in difficult spots. The flash bounced off the wall and all around to back light the racks and opened up the dark corner.

Now I needed to place my subject in front of the background, and turned an empty bucket upside down for a short stool. To hide the bucket, give Rob something to place his hands upon ( I think hands are very expressive in portraits ) and add more medical equipment clues to the photo, we rolled over two large tanks that take oxygen from the air. First we had to dig them out of the mess, unwrap them and clean them off.

My second flash was a three degree honey comb grid from camera left, a spot light that at this distance, four feet, lit just a six inch circle, to open Rob’s face with light and not throw extra light all over the set, destroying the mood I was creating. 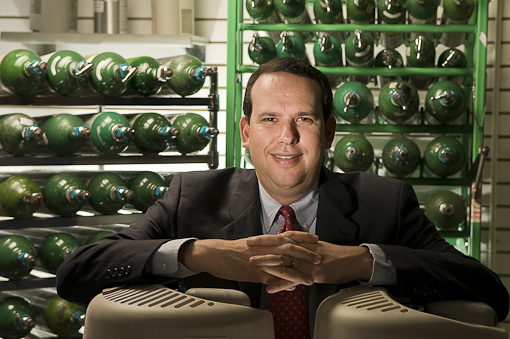 Light number three was a narrow strip soft box high above Rob at camera left to throw straight down a rim light on his hair, shoulder and hands on the tank tops. The strip was about 14 inches wide and 40 inches long, and also kept stray light from being thrown all over.

At that point I thought the front of the oxygen generators were to dark, so I added light number four, pointed straight down from six inches above the gray concrete floor. Turned to very low power, it added just enough fill light at a cool upward angle to complete the shot.

With a warehouse worker sitting in, I adjusted the lights with flash meter and camera histogram, and about two hours after arriving I was photographing Rob for his first magazine cover.

I love it when I successfully create an environmental portrait that my client is happy with and was a challenge of logistics, aesthetics and photographic lighting. It’s fun, and to me, even a bit cool. But glamorous, sorry kids, I would have to say no.

Here's a link to more Miami corporate photography.
Posted by Tom Salyer at 11:55 AM No comments: Links to this post