Yesterday I was preparing a collection of panoramic landscape photographs to be exhibited in July at the Qinghai Sanjiangyuan International Photo Festival in China, and while rescanning some of my favorite large format film images I compared them at pixel level to my recent panoramas stitched in software from multiple digital captures.

I had forgotten about film grain! Slow speed digital doesn't have any. Film horizons are straight lines! Rotating a digital sensor in a circle for a stitch curves the horizon and you need to hide the distortion. Light table viewing of film with 4X loupe misses seeing tiny cars parked a mile across mountain lake! Processing digital on a giant computer monitor you see all the flaws.

But I quickly stopped pixel peeping and was transported back to those outdoor locations to soak in the beauty I experienced when the shutter clicked, and realized it really didn’t matter if I was capturing my small slice of the world with a piece of film or a digital sensor.

Pretty obvious really, the story, emotion and sense of place in the photograph is what matters.

I can’t say which panorama making technique I like the best. With film, I have to slow down, think and be deliberate, as it requires setting up a heavy tripod, assembling the view camera rails and bellows, then attaching a lens. This makes me choose my subject carefully.

Under a dark cloth, I view the image upside down, so the scene becomes abstract, helping me balance my composition. I then remove the cloth, insert a preloaded magazine, and have four shots on one roll of film. Oh, exposing color transparency film is tricky. And nerve wracking, each frame costs the equivalent of a small cheese burger.

With digital, I quickly set my Nikon vertically in a special rig that allows me to swing around the lens nodal point, and I can zoom to compose precisely. My “35mm” lenses allow me to get into tighter spaces and see higher and wider. Long time exposures are linear as opposed to film, so no reciprocity failure to calculate in, and the camera processes out the noise. And with digital capture being “free” ( not counting the massive investment in upgrading cameras, computers and software ), I save a lot of cheeseburgers. Yum.

Maybe creating panoramas with digital cameras is quicker and easier. Yet film is more contemplative and precise. So I’ll just pick the tool that works best for my subject and creative ends.

I'm looking forward to visiting Qinghai, one of China’s least populated provinces with not quite six million people ( out of 1.2 billion ), and it’s nestled up against Tibet to the West. I’ll be traveling with colleagues Nancy Brown of Boca Raton and Tania D’Avigon of Boston, both have also been to China multiple times, and we will drink a toast or two with our Chinese friends from previous trips.

The photo festival has invited many “foreign photographer friends” to attend and exhibit, including our American Society of Media Photographers South Florida chapter, which has sent their Light of Florida photography collection.

If you are interested in seeing the panoramic cameras used for these photos, I’ve posted a little more information on my Miami panoramic photography portfolio site.

Posted by Tom Salyer at 2:53 PM No comments: Links to this post


Do you ever hear an old song on the radio that immediately takes you back to your past? Maybe that wonderful summer after graduating high school, driving the back country roads of rural Idaho with your arm around Gloria, the girlfriend soon to be left behind on the way to college in the fall ?

I’m not a psychologist and can’t explain why music imprints into our brains, but I do know that sounds tap a deep emotional response in me. Just like that summer song triggering an old story, when I hear croaking frogs, I feel a rain forest in my head. When I hear wailing sirens, I’m surrounded by oppressive big city traffic. The Tibetan monk’s cymbal reverberating in my headphones, I smell yak butter tea.

Recording ambient sound is one of my favorite parts of multimedia, and for the second audio slide show I produced for Archbishop Curley Notre Dame High School’s “There’s A School For That” campaign, I had a lot of fun with sound.

What better way to trigger those high school emotions than recording the clanging class change bell and hallway voices. I lead the show with about seven seconds of only ambient hallway sound, then duck under her interview, leaving levels high enough to still hear the banging lockers and squeaking sneakers. 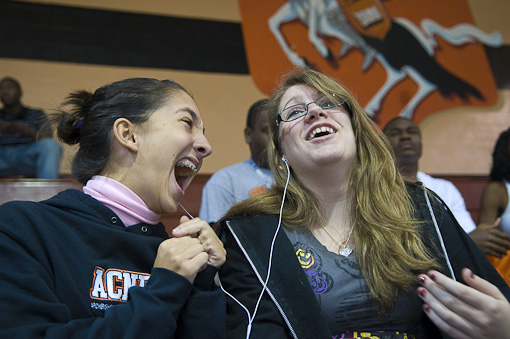 Here the ambient sound first catches your attention and draws you into the story, and before Silvia’s interview begins, hopefully you’re hooked. Then the sound bed drives the narrative along. Between Silvia’s thoughts, ambient sound levels rise, taking over the story telling, like at the basketball game where you hear the coach and players huddle, and the referee’s whistle.

Just like real life, our brains don’t concentrate on that sound bed, but we feel the sound, we see the the sweaty players, we know we’re in the high school gym. 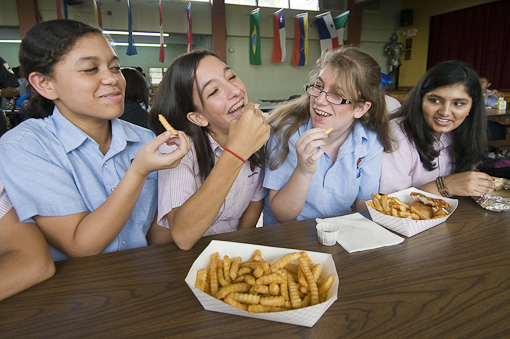 As the show winds up, the sound of frying french fries comes in strong before Silvia  beings her story of her older sister asking if Curley still serves the fries she loved. The bubbling of the cafeteria deep fryer catches and holds your attention, and as the sound bed ducks under, I can taste those same fries that she is talking about. ( Good fries, BTW, I tried and liked them, though maybe the accompanying cheese burger clouded my judgment ...)

I love the complex layers of  interview voice blending and threading around and over and behind the background sounds of life in a vibrant high school. I decided to run a sound bed under the entire length of each of the “There’s A School For That”  multimedia shows because, well, I love ambient sound. It tells me stories, triggers my emotions and just like that old song on the radio, makes my life a whole lot richer.

Posted by Tom Salyer at 3:52 PM No comments: Links to this post