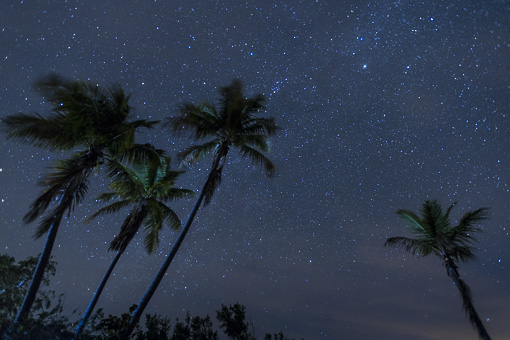 On a moonless night last January, coconut palms are silhouetted against star filled sky at Bahia Honda State Park in the Florida Keys. With Nikon D610 30 seconds f 2.8 at ASA 1600. A series of similar time exposures at near by Sand Spur Beach were assembled into a time lapse making up the second half of the Talking Picture Postcard below.

The Florida Keys are a pretty magical place to visit, and I often become confused with the changing pace of time I experience on the island chain. Rushing down the highway from Miami my body struggles to slow down and relax. Gotta answer emails, gotta get to where I'm going. But by the time I make it below Marathon, about Mile Marker 40 or so, I'm looking off at the blue Atlantic from up high on the Seven Mile Bridge, the sun is shimmering off the wave tops, and I see a lone sail boat miles off at the edge of the Gulf Stream.


Real time video captures a slow moving sailboat for 19 seconds, and then an hour long time lapse reveals stars rotating above the ocean at Bahia Honda State Park in this 36 second Talking Picture Postcard. Field-recorded natural sound captured nearby. iPhone & iPad link or if your receiving this by email.

That boat is barely moving, it's is so sloooooow, just a tiny triangle of sail on the horizon. Time seems to stand still. The Keys' magic dust is sprinkling down on me now, transforming my fast time to Keys time, slow time, time to take in all the sun and water and stars up in the pitch black sky. In a blink I find myself on the beach, long after sunset, hours from the moon rise, I'm soaking in all those pin pricks of light  I forgot even existed.

Time to write home about this time warp I'm experiencing, but not the fast way by posting to social media. I'll take the old fashioned way, I'll write on the back of a postcard a couple of lines, stick a stamp on it, scribble an address, and mail another Talking Picture Postcard.
Posted by Tom Salyer at 8:40 PM No comments: