I had just flown and sat around in airports for nearly 30 hours to reach Chengdu from Miami, and by my first morning I needed to stretch my legs, get some fresh air and make some photographs. As I entered Wenhua Park, just a few steps from my hotel, I could feel the cobwebs tugging at the corners of my tired brain.

I love wandering Chinese urban parks, especially early in the morning while millions head off to work through honking traffic and yellow smog. I find open spaces, greenery, even chirping birds. And parks provide lots of people enjoying themselves outdoors, easy to approach and photograph. 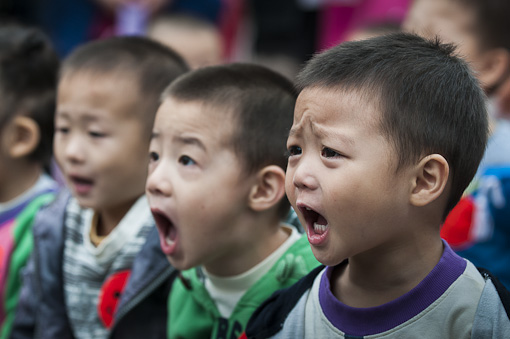 I’ve been invited to China several times to attend photographic festivals, and once to lecture at a trade school, and my eager hosts booked my days with activities they thought a photographer would enjoy. Visiting the ethnic village and puppet factory made photos. The trip to the electrical cord factory and municipal museum, not really. But by getting up early and skipping breakfast, I could fast walk to the closest park and find people I would shoot on my own terms.

And skipping a breakfast of cold noodles with super spicy meat sauce, watery oatmeal or pickled shredded vegetables would keep my mind on the pancake house back home give me time to shoot. 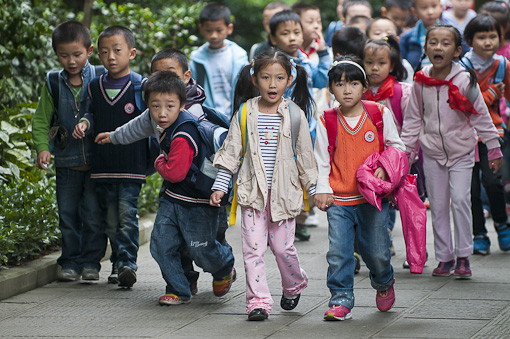 On this weekday in Wenhua Park I found children flowing past the usual seniors tango dancing and performing tai chi with swords. The young, brightly dressed elementary aged students were on school sponsored outings with teachers and parent volunteers.

As about three dozen kids sat in tiny plastic chairs, their teacher read them an adventure story while encouraging them to vocalize the animal’s roars and growls.

As I plopped down nearby on the pavement and began making photos, the children cheered, laughed and howled at the top of their lungs. I shot wide, then closer, then super tight, picture after picture, the children’s expressions were terrific. Before I knew it, their roaring and blown away my cobwebs and I was ready for the coming three weeks traveling in China. 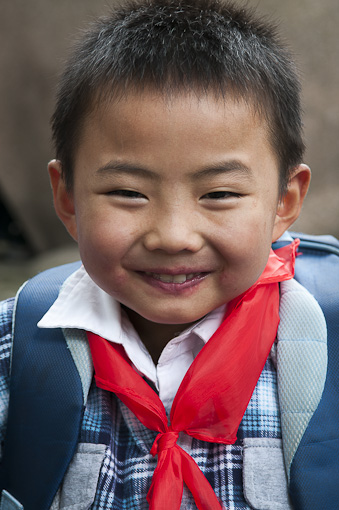 Wearing the red scarf uniform, a member of the Young Pioneers is curious about my
cameras in Wenhua Park, Chengdu, China.

Posted by Tom Salyer at 8:19 PM No comments: 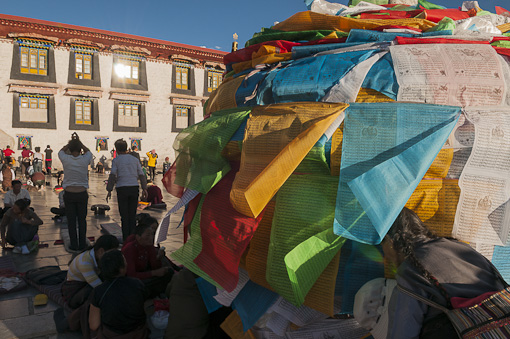 Exploring Lhasa on my first day in Tibet was so overwhelming that I was having trouble seeing photographs. Crowds of Buddhist pilgrims dressed in regional costumes streamed down every street, Han Chinese merchants in Barkhor Square sold everything from prayer wheels to yak butter and the occupying Chinese army marched with assault rifles at the ready.

I was gasping in the thin air at 12,000 feet altitude. My stomach was deciding if it liked my yak stew lunch. Colors were way to saturated, the blue sky, the monk’s saffron robes and the rooftop golden lambs.

So I closed my eyes and started listening for pictures.

Close your eyes, listen to the sounds around the Jokhang Temple in Lhasa, and tell me what you see. iPhone & iPad link to 1:48 long MP3.

The first sound I heard was a far off rhythmic slapping and chanting.  I discovered over a dozen workers, men and women, building a traditional aga earthen roof atop the Jokhang Temple. They were on their hands and knees with hand held wooden paddles compacting the mix of gravel, dirt and water infused with willow tree bark.

I recorded the sound of wooden and leather hand protectors scraping on the cobble stone temple square as the pilgrims prostrated them selves in repetitive prayer. They stood with their hands together above their heads, then down on their knees, then on their stomachs with arms out stretched.

My ears discovered a man singing prayers from a well worn book of Tibetan script, his voice competing with the thousands of pilgrims circumambulating the mile-long circuit around the temple.

Slowly the sounds awakened the visual corners of my brain, I opened my eyes  and began making photographs.

Editors note: If you visit the "aga earthen roof" link above, poke around the site a little and see how the Chinese government views the Tibetan people.

During my assignments and travels I've been recording the sounds I overhear, and many don't have supporting photographs or stories. This occasional series will be my excuse to share my audio orphans, these Sounds Overheard. Please also visit my Miami editorial photographer portfolio.
Posted by Tom Salyer at 5:29 PM No comments: